Why you will fall in love with a moonstone engagement ring 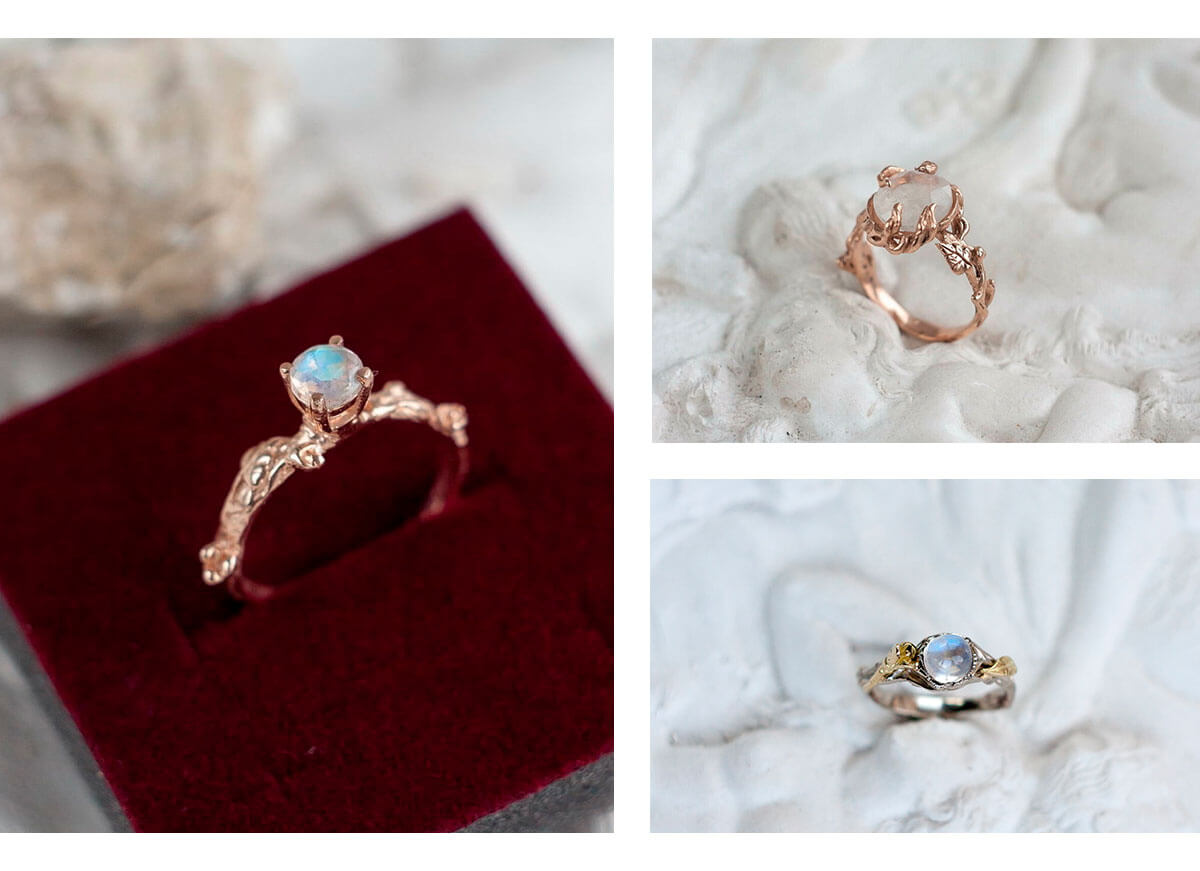 If you have some doubts about a traditional rule that an engagement ring should cost three months’ salary, it’s article is exactly for you.

If you have some doubts about a traditional rule that an engagement ring should cost three months’ salary, it’s article is exactly for you. We will suggest a beautiful and unexpected alternative to a usual halo diamond ring.   By the way, two-thirds of younger Americans think an engagement ring should cost less than $2,500, according to a survey from TD Ameritrade from 2019. They mean that their wedding savings may be rather spent for the honeymoon, etc. than on a traditional engagement ring.  You still can make a statement with your engagement ring or wedding band and be within budget. Not to mention that celebrities and princesses used to opt for this alternative without any hesitation. Just have a look at the marvelous moon-like surface of the most ethereal gemstone. 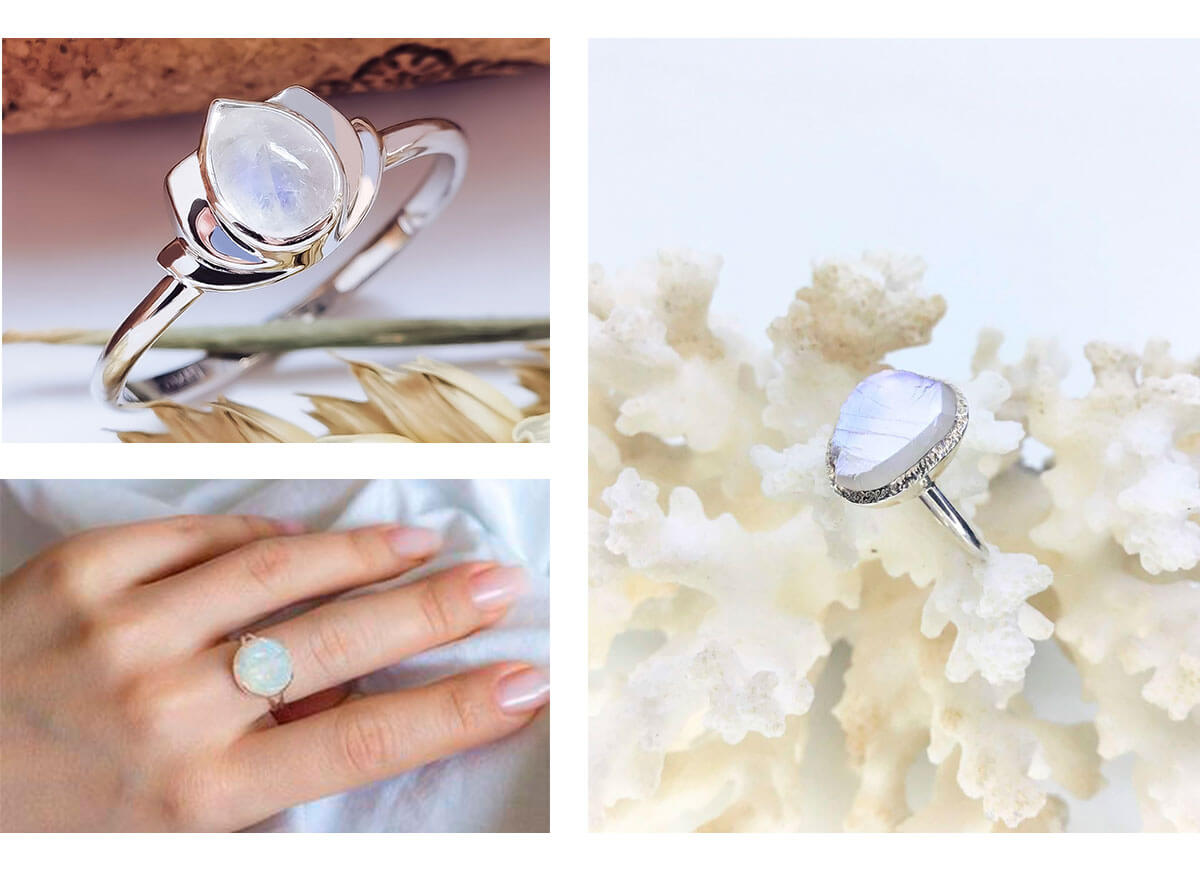 The Gem that is Out of this World 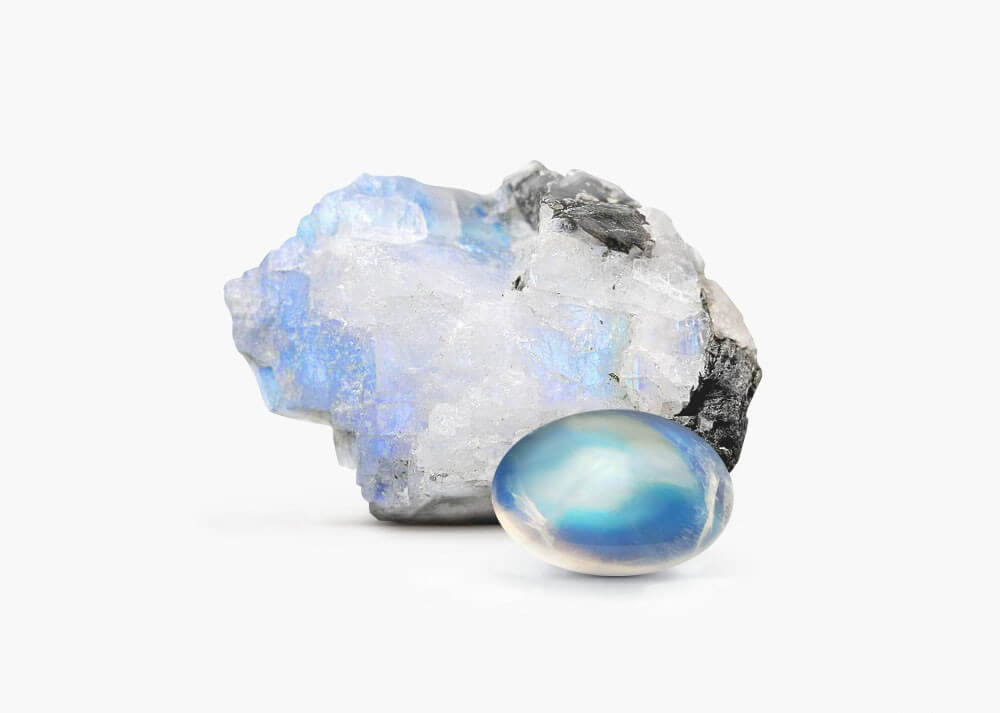 If you need to see the light of a thousand moons just look at this gemstone. “Jandarakand” or “shine of the moon” is called in India. The old Indian legend says gods got the pieces of the stone as a precious gift from the Moon.

However, the moonstone is formed by the Earth. Its silver-blue color and mysterious lunar glow are built by the light that reflects off its inside layers and “floats” around the stone. This optical phenomenon is called the adularescence and also known as the Schiller effect (or just shiller).

The more colorless the body of the moonstone and the bluer the adularescence, the higher is its value. But this effect is not revealed until the stones are cut and polished. That’s why a moonstone is often cut en cabochon – with a rounded convex surface – that makes its mysterious allure more expressive and more valuable. On rare occasions, some transparent stones can be also faceted.

The most common cutting style of moonstone is the cabochon that displays its shimmering shade to best advantage. 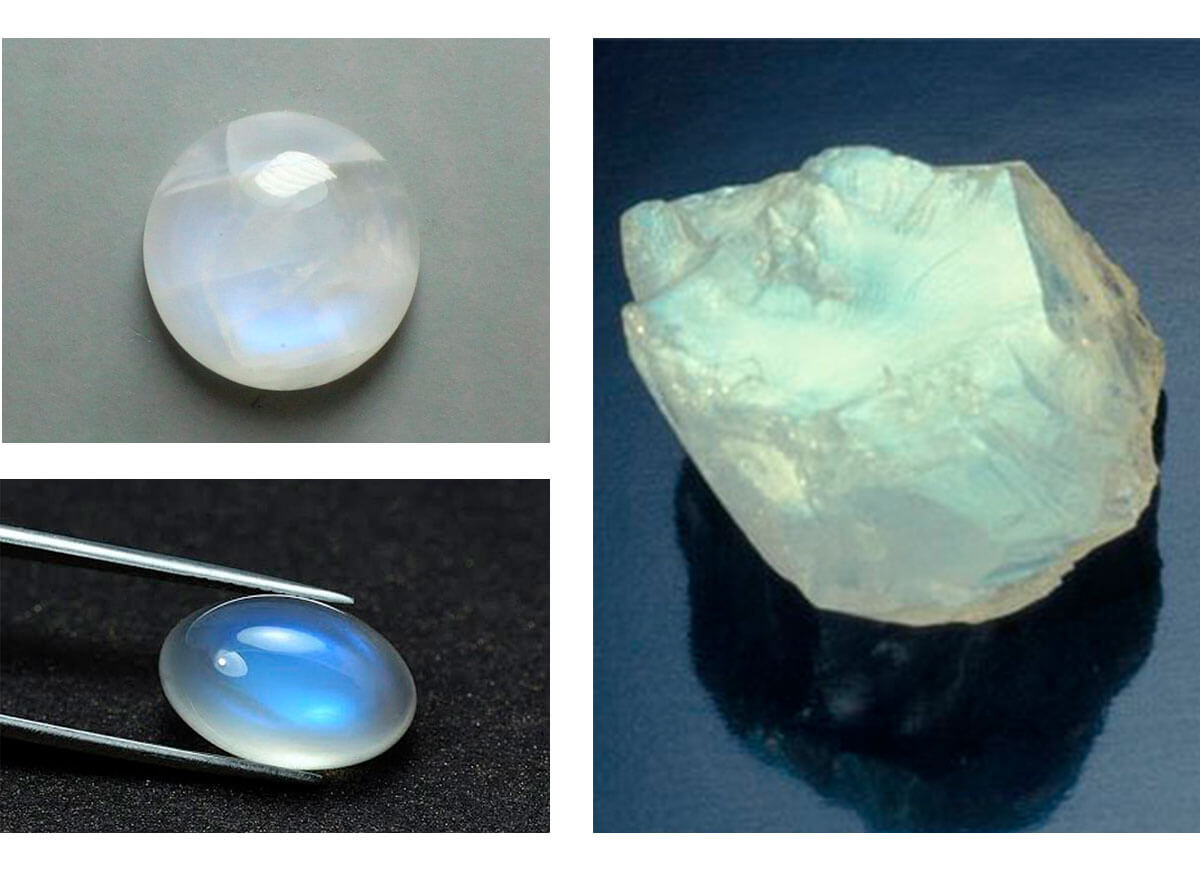 More about a moonstone 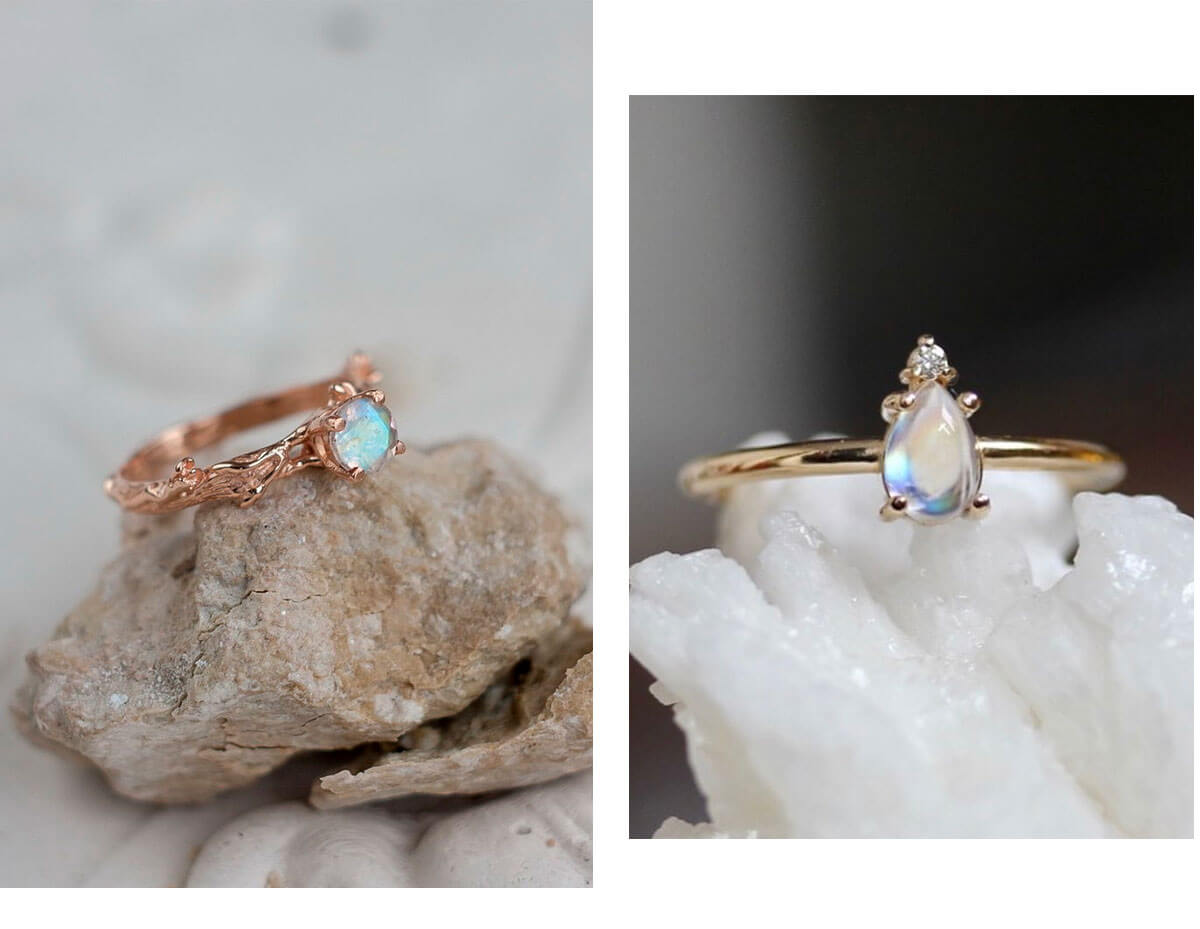 Piece of Art in past & modern times 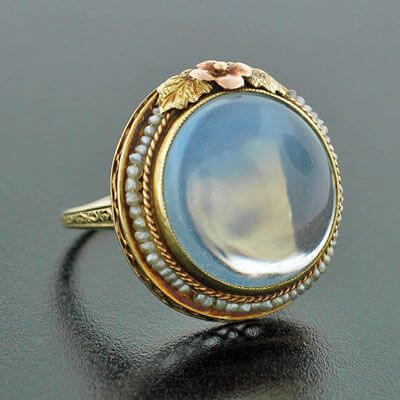 The moonstone became especially popular in the early 1900s, during the so-called Art Nouveau period. This style of art which was expressed also in jewelry was inspired by flowing natural forms resembling leaves and blossoms of plants. For jewelry craftsmen of that period moonstone with its smooth shapes and mysterious shimmer was the essence of gemstone’s natural beauty.

Great artisans of the Art Nouveau, such as René Lalique and Louis Comfort Tiffany, featured moon-like gems in their handcrafted items. These Art Nouveau rings mesmerize with their depth and elaborated work. They are very catchy and exquisite at the same time. 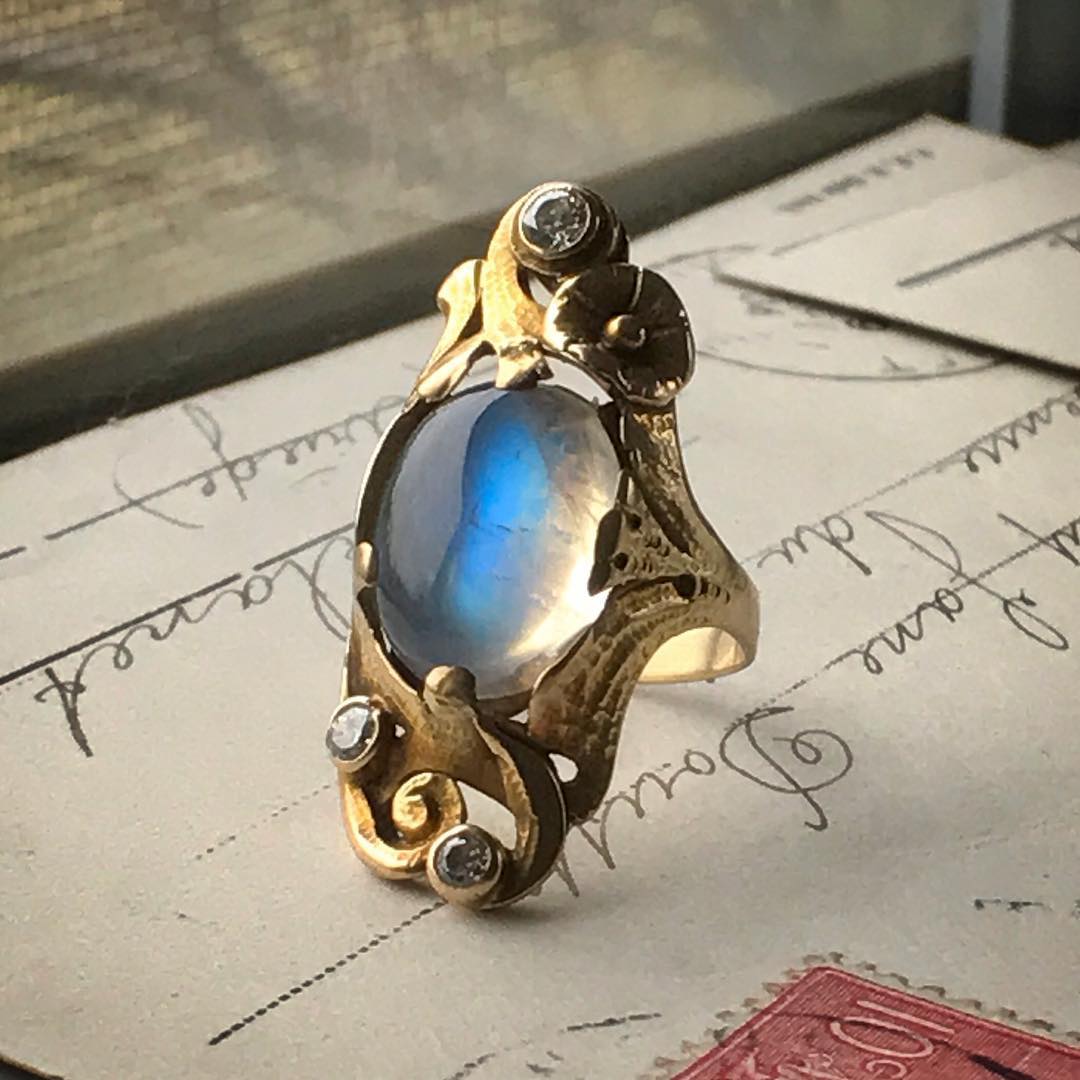 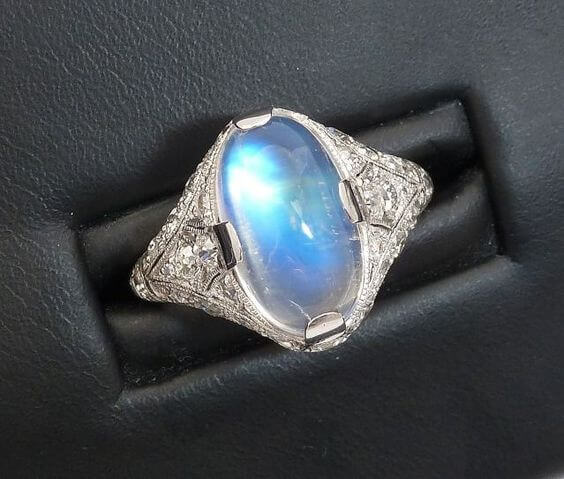 Art Deco Tiffany & Co moonstone diamond ring with a grandiose translucent bluish moonstone centerpiece framed in platinum, circa the 1920s.
The main characteristic of these Art Nouveau rings is a repeating floral motif. Such design you can easily embody in your unique moonstone engagement ring if you desire something appealing, yet elegant. 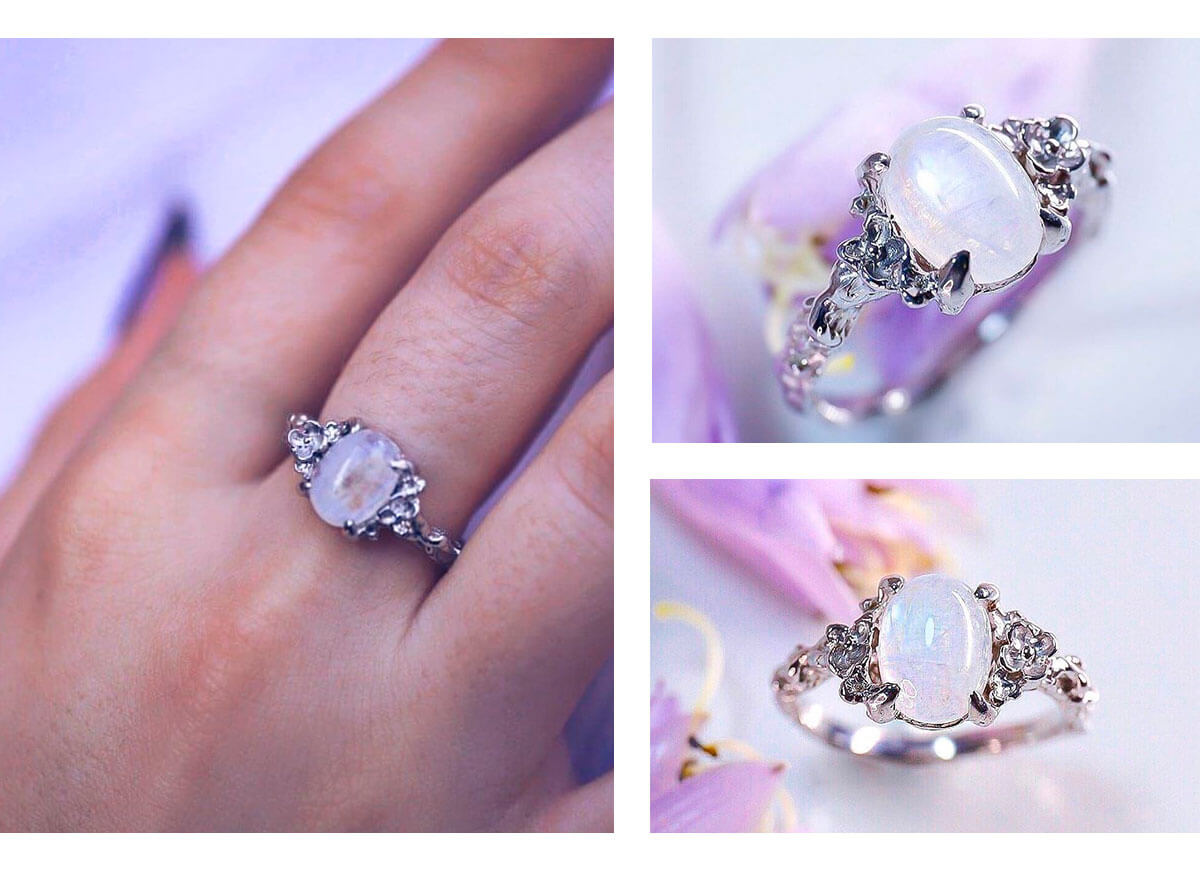 Besides, moonstone is a quite pliable material for carving. It can be carved into amazing shapes. One of the most common shapes was the “man in the moon” face. 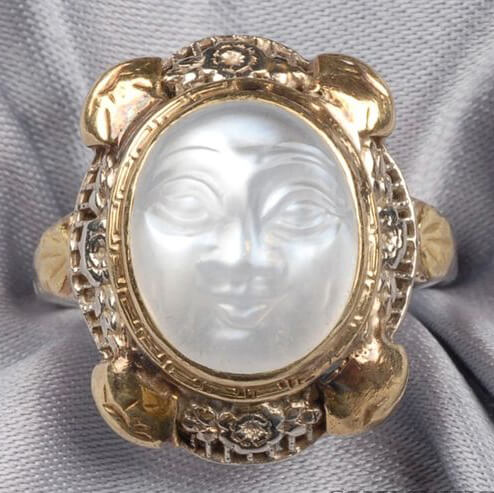 Gold moonstone ring from the 1920s with a carving work as a centerpiece – a “moon face” that has been incorporated into jewelry since ancient times.
Such rings are really unique piece-of-arts of Art Nouveau preserved in our modern time. Since that time, the moonstone has always been in fashion. “Flower child” movement followers and modern New Age designers constantly turn to moonstone’s luminous beauty for inspiration.   For example, Louis Comfort Tiffany’s designer Meta Overbeck had her favorite combination of platinum, moonstone, and sapphire, highlighted by small diamonds. She used it in many astonishing necklaces. 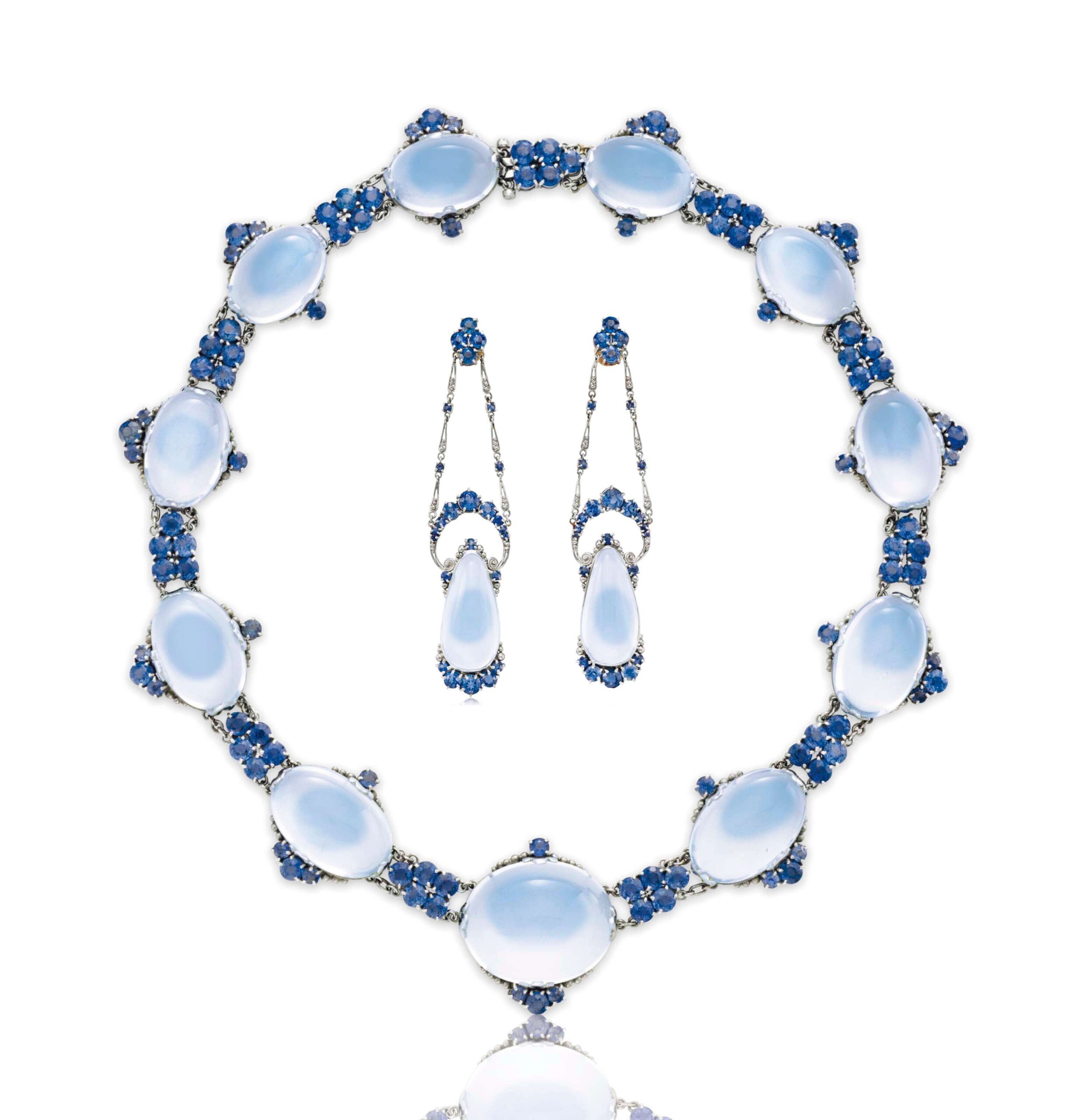 The cold palette of this set of moonstone and sapphire by Louis Comfort Tiffany is mesmerizing
She was sure that pale moonstones are perfectly combined with different cold-colored gemstones in a shimmering icy palette. You can use this idea for the design of your personal moonstone diamond engagement ring. It will be a time-tested and refined choice. 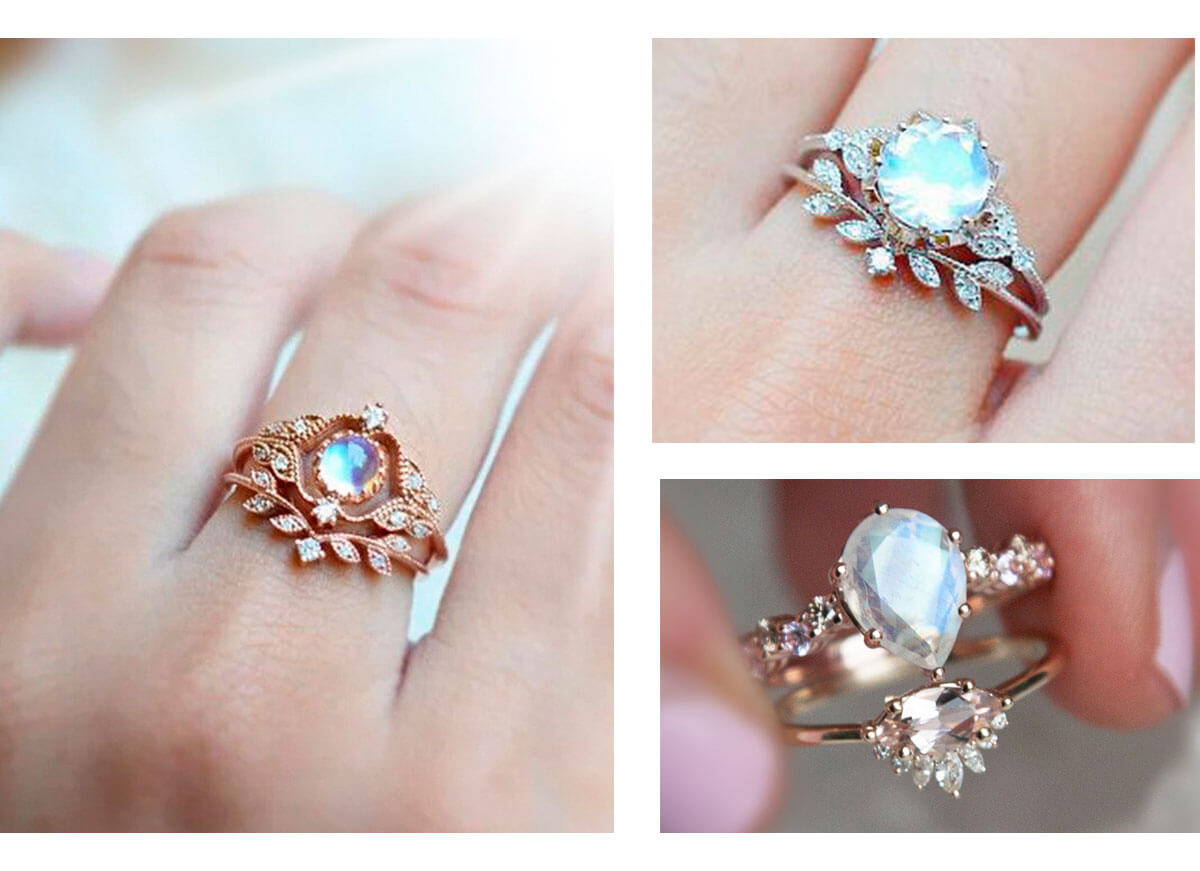 However, the bold contrasting combination of gemstones in an engagement or moonstone wedding ring is also possible. For this case, you can choose rose gold or any other bright metal and a solitaire moonstone of bluish coloration. Such iridescent moonstone rings look very eye-catchy and remembering. 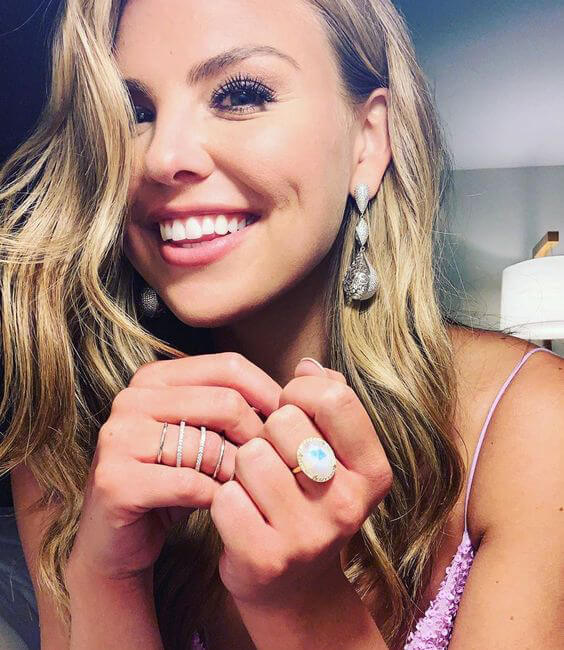 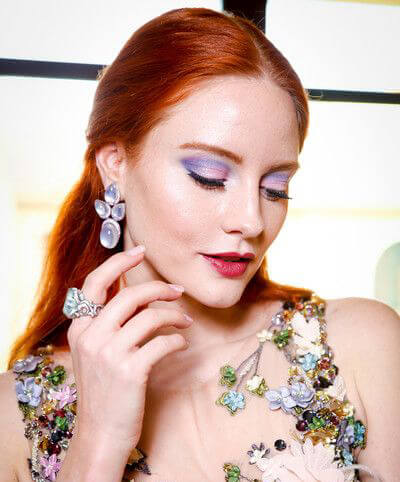 The German model and actress Barbara Meier wears diamond and moonstone jewelry at Golden Globe Awards in Beverly Hills, California.
Moonstone is growing in popularity for 2021, be sure of that while checking actual jewelry trends. It’s expected that it will be one of the top jewelry trends for the next Spring/Summer season as well. Nowadays, it’s trendy to wear big bold statement pieces of women’s fine jewelry including rings. An outstanding moonstone in your engagement ring will be totally in fashion. You will find moonstone jewelry in the collections of many high-end jewelry houses and on the runway. 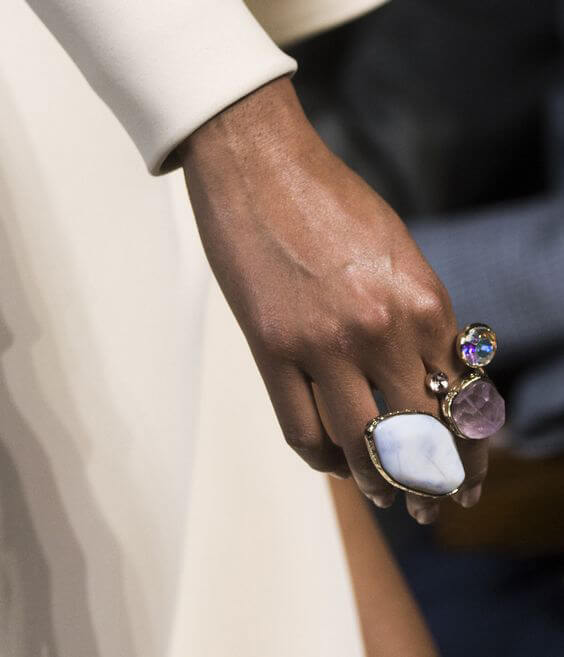 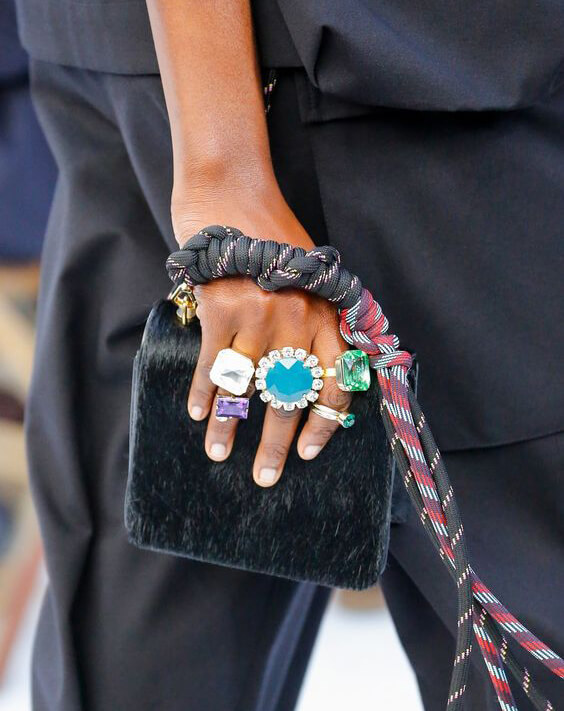 Dries Van Noten Spring 2019 Ready-to-Wear fashion show – Details
Moonstone rings constantly flash on the catwalks as accent details of the entire outfit or as statement jewelry carefully matching with runway color combinations. As for the popular color palette of gemstones, it’s usually similar to Pantone’s colors of the year. Moonstone can occur in different colors so it is only up to you to choose your favorite shade. 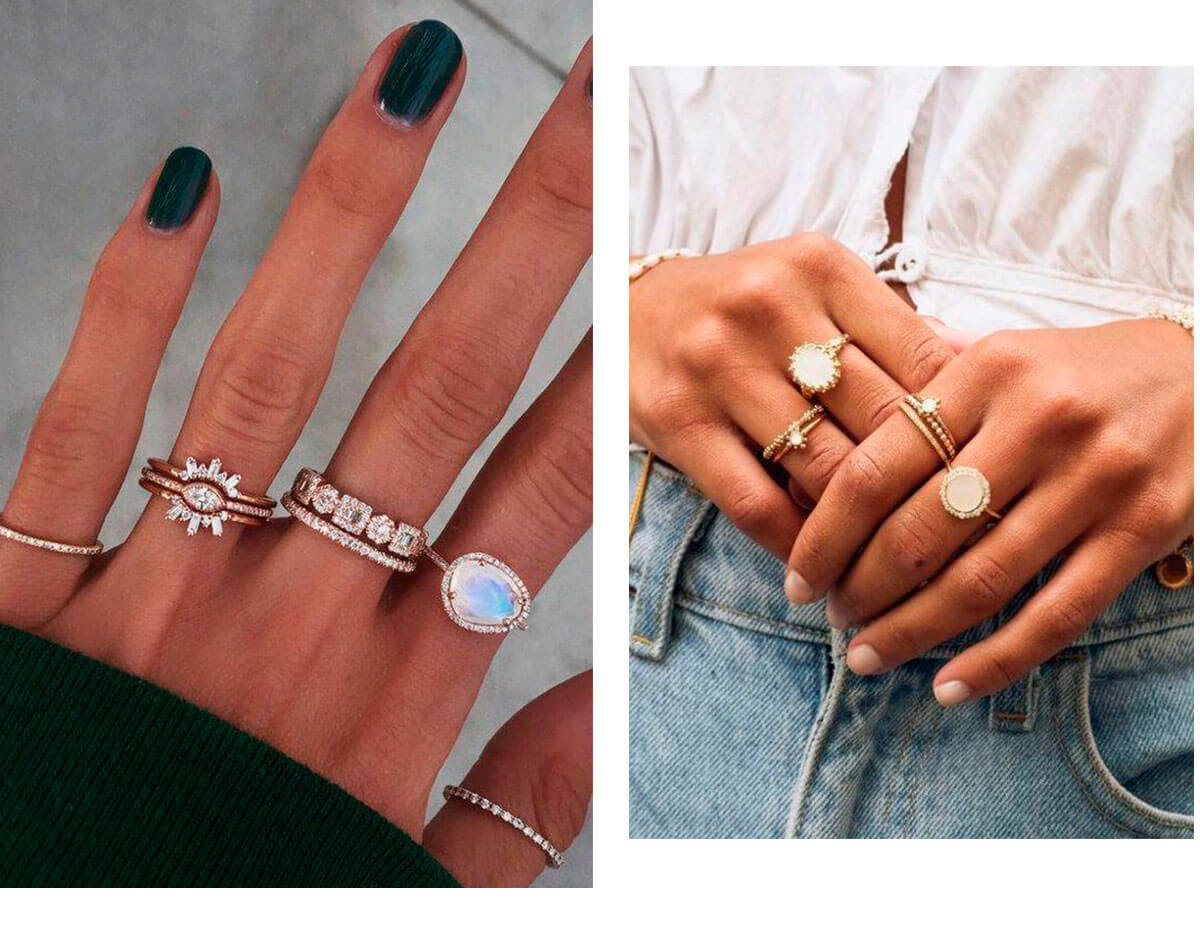 Norway’s Princess Märtha Louise, the daughter of King Harald and Queen Sonja wore her Moonstone and Diamond demi-parure for a series of portraits during her engagement in 2001. A demi-parure is a set of some matching jewelry pieces. Here it included earrings, a necklace, and a magnificent sky-blue moonstone engagement ring. This set is one of Norway’s princess most worn jewels, it has been worn to a variety of events.
Why do female members of the royal families choose moonstone jewelry? 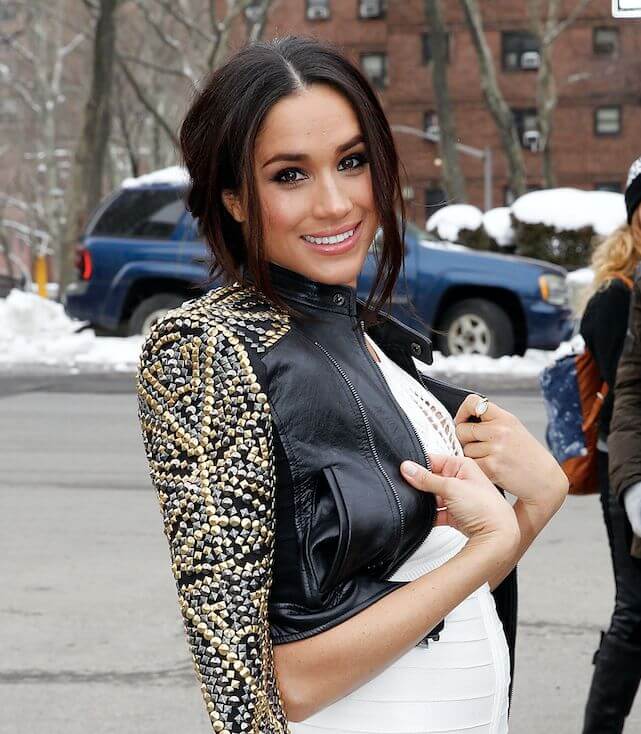 Meghan Markle wears one of her favorite rings with creamy moonstone during NYC Fashion Week in 2014. 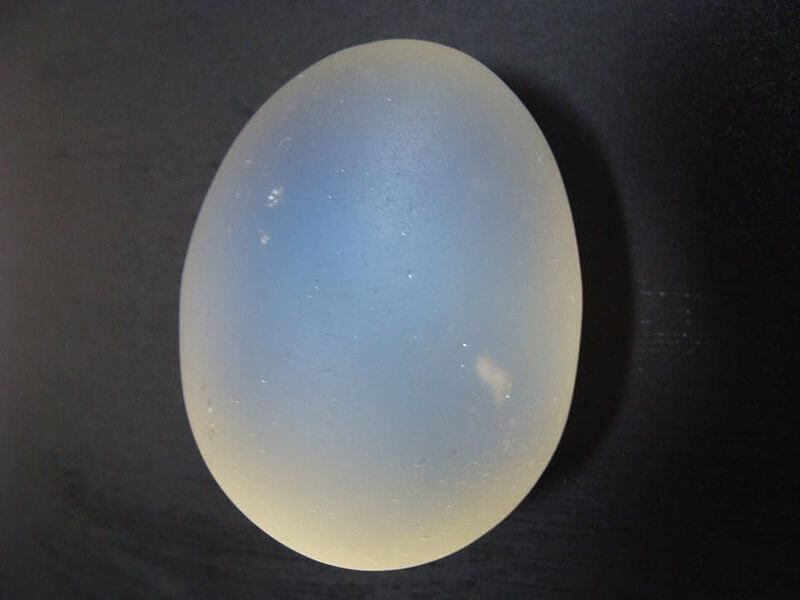 This probably one of the largest moonstones in the world of approx.100 grams weight (or 300-450 carat) came from the first Japanese expedition to Mt Kilimanjaro in 1918.
A moonstone engagement ring is considered to be a quite affordable alternative to a diamond or sapphire ring. But if you believe that moonstone is an inexpensive common stone, it will be a bit far from the truth. 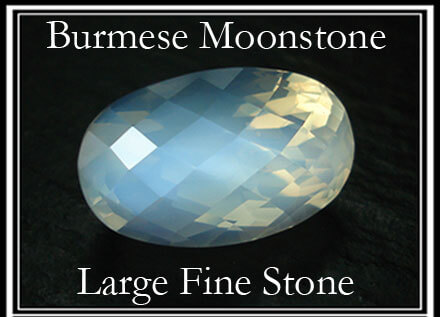 Moonstones from Mogok town of Myanmar or Burma, the Southeast Asian country can be extremely expensive.
Expensive moonstones should be without any inclusions and displaying an effect of a shimmering golden body with a silver/gold or blue glow. Especially large moonstones are very rare and this makes them valuable.   So, if you need to find a valuable moonstone for your engagement ring, take into account the following factors: 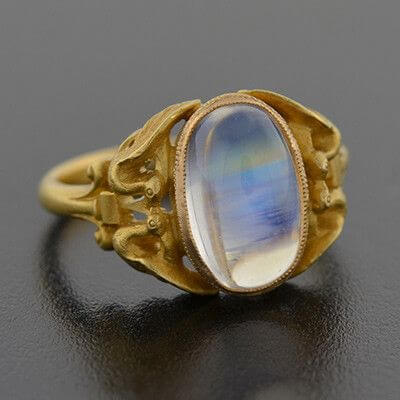 In rare instances, moonstones may also be multicolored showing blue, with green and/or orange as in this Art Nouveau rainbow moonstone ring. Such stones are also known as labradorites and are quite valuable in their own right.
However, common affordable milky moonstones can be very impressive in jewelry pieces, especially surrounded by other gems. Timeless masterpieces of famous designers and great jewelry artisans convince us of this. 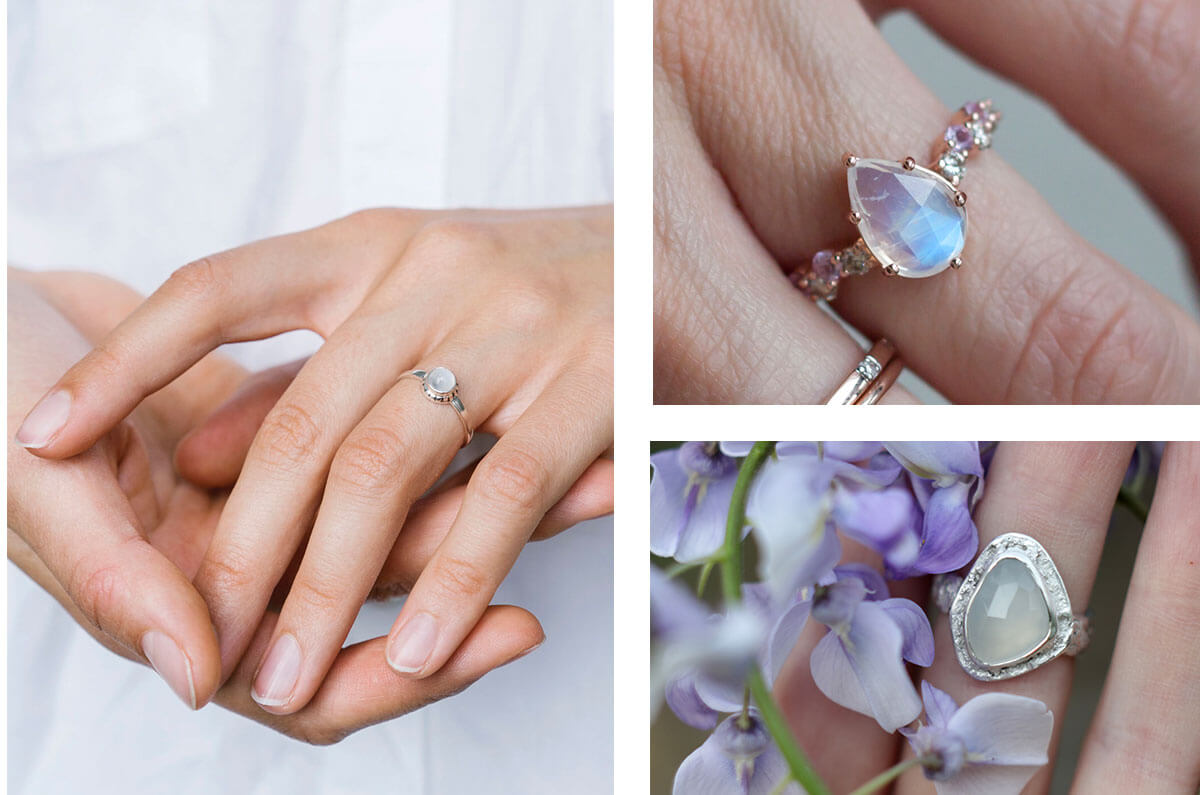 So, if you are searching for an affordable, yet stunning engagement ring, a moonstone of different shimmering shades or astonishing transparency will be a perfect choice.
Anna Paquin, the actress from the hit TV series True Blood, demonstrates her vintage moonstone engagement ring where the gold with a black finish sets off sparkling gemstones. A moonstone wedding ring will be an unbeatable option for anyone looking for exquisite and breathtaking jewelry for his special day. It can be customized according to your preference, just let us know your size and feel free to ask any questions you have. 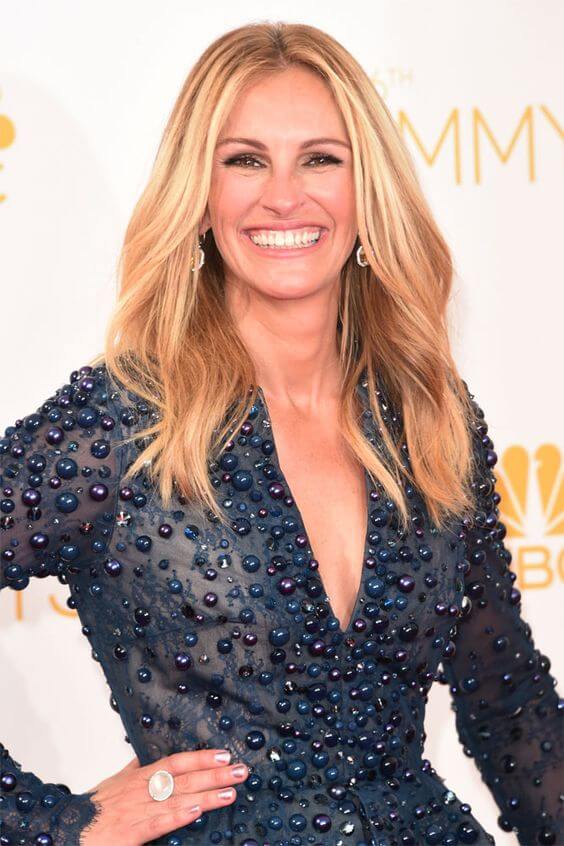 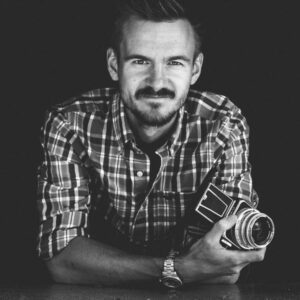 I went from being an entrepreneur in my early 20s to being a wedding photographer, and now back to an entrepreneur. It's always about passion and true feelings and emotions for me. I'm creating a family legacy, pieces of history. Not just a ring.